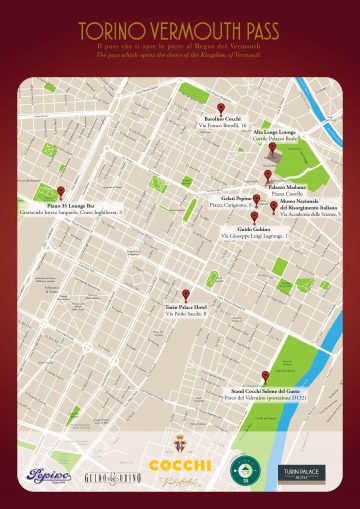 As Terra Madre Salone del Gusto 2016 approaches, Turin become the international food and wine capital once again, with visitors and exhibitors from all over the world.
Turin is famous as the city of chocolate, but we also want Turin to be known as the city of Vermouth.

Vermouth di Torino, born from the meeting between the wines of Piedmont’s hills and the herbs of the Alpine valleys, is now a collective heritage of the Piedmontese thanks to the royal court of the House of Savoy, the first great promoters of a product which, starting from the end of the 18th century, generated a flourishing industry that made Piedmont the “Kingdom of Vermouth”.
We have created the TORINO VERMOUTH PASS, “the key to the doors of the Kingdom of Vermouth” to allow the privileged holders of the pass to create their own tasting and informative itinerary in steps that tell the story and the new style of Vermouth di Torino. The initiatives will be active during the Salone del Gusto 2016 (from the 22nd to the 26th of September).
Cocchi has been joined by important partners who have shared experimentations and projects with us in recent years. With this pass, you can access a series of dedicated events and taste the various forms of Vermouth: alone, as an ingredient in the kitchen, in the form of ice cream, praline and cocktails and, going back to its origins, discovering the aromatic herbs that characterise it.

THE DESTINATIONS
The sensorial itinerary in the centre of Turin comprises a series of experiences accessible constantly during the Salone del Gusto, by simply presenting the pass:
Cocchi – Salone del Gusto Parco del Valentino, Stand D132 – The full range of Cocchi Vermouths compared in the Tasting Box.  Info and tasting point, sales, distribution of materials and collection of your personal TORINO VERMOUTH PASS.

THE EVENTS
Other one-off events and meetings on the culture and history of Vermouth in Turin:

For the entire duration of the Salone del Gusto the Cocchi stand (Parco del Valentino – Lungo Po stand D 132) will act as an info point, with the distribution of maps and passes.