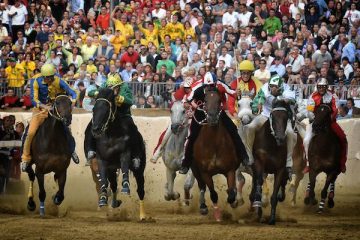 Exhilarating bare-back horse race dating back to the 13th Century, the most ancient in Italy features a splendid historical procession which winds through the historical town centre with more than 1200 people representing the districts and neighbourhoods over the medieval history of Asti.  During the days preceding the Palio the town is decorated with the flags of the different districts and the colours of the flag wavers, the propitiatory dinners, the Palio traditional market stalls and the horse trials on the horse tracks set out in Piazza Alfieri.

2 pm Piazza Cattedrale – start of the historical procession with 1200 people in medieval costumes, which reenacts events and moments of life in the Middle Ages, in the following order: the group of the Captain of the Palio; the district/municipality that won the race in the previous edition; the classified districts of the town and municipalities in the previous edition; other districts/municipalities taking part in the horse race.
Route: Piazza Cattedrale, Via Caracciolo, Piazza Cairoli, Corso Alfieri, Via Gobetti, Piazza San Secondo, Via Garibaldi, Via Gardini, Piazza Alfieri.

And in the previous days…..

From 8.30 pm Banquets in the districts of the town and municipalities competing in order to propitiate the victory

From 9 am to 11pm Piazza San Secondo: first day of the colored Palio Market with handicraft items dedicated to the horse race

From 8.30pm Banquets in the districts of the town and municipalities competing to propitiate the victory