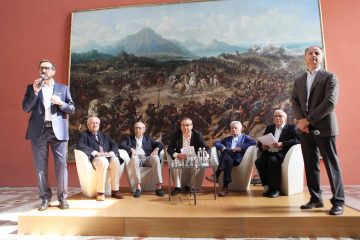 The legal definition of Vermouth di Torino is now a speifically recognised denomination by law, having been sent to Brusells by the Italian Ministry of Agrculture.

The new organisation, the Vermouth di Torino Institute, was established on Friday, April 7th 2017 in Turin, by the companies and brands responsible for producing the majority of vermouth in the Piedmont region of Italy. The first president elected is Roberto Bava of Cocchi and vice president Giorgio Castagnotti of Martini & Rossi.

These founding partners, each with different historial characteristics and sizes of production, are delighted to share their common goals and the merit of gaining this new geographical identity.

The founding brands have appointmed Piero Miravalle, Pierstefano Berta, Giorgio Ferrero and Fulvio Piccinino as honorary members of the Institute as acknowledgement to their active contribution through their wealth of experience and professionalism in the field.

The Vermouth di Torino Institute is based in the Piedmontese capital Turin, the operational structure and the business programs are still a work in progress as the Institute will act in different markets with many common objectives.

The Institute is an association that aims to value, promote and enhance the quality of ‘Vermouth di Torino’ and its continued expansion in gobal markets with all producers working in synergy. Working closely with the agricultural department in Piedmont, all producers are keen to have a sustained presence in the region with the recent new lease of life of the category.

The increased visibility of ‘Vermouth di Torino’ throughout international markets will certainly have a positive impact Piedmontese agriculture, particularly the main ingredients used to make vermouth: wine, sugar, extracts of herbs and spices.