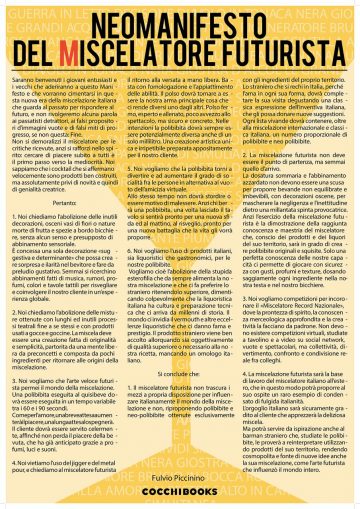 Cocchi’s colourful and artistic mixology competition returns for a 4th edition with the latest instalment: Digital Futurist Mixologist 2020 now open for entries. This year, the competition will take place entirely digitally and for the first time reach beyond its Italian home to welcome candidates from the international bartending scene.

Digital Futurist Mixologist 2020 is the opportunity for creative bartenders to deep dive into the Futurist art and design movement which has had a strong influence on the Italian cocktail scene of the 1900s. Hopefuls will use their imagination and creative flair to come up with a cocktail (or ‘polibibita’) and artful multi-sensory experience inspired by Futurist mixologist and artist Filippo Marinetti, using Italian products only.

Entries that comply with the competition’s conditions will be published on Cocchi’s Facebook page, encouraging fans to like their favourite drink. A jury of experts will select the five contestants who have created the most impressive cocktail experience and got the most votes. They will be invited to enter the final which will be held virtually on 21st July 2020 in front of a panel of international industry figures.

More information to allow contestants to discover all rules about the competition alongside videos featuring Fulvio Piccinino and Roberto Bava, writer and editor of the iconic book “La Miscelazione Futurista / The Futurist Mixology” talking about the history and secrets of Futurist Mixology: www.miscelazionefuturista.com

For information and to submit entries please contact: barcocchi@cocchi.com.

FUTURIST MIXOLOGY – The Futurist Mixology movement has had a revival in recent years thanks to the studies of barman and drinks historian Fulvio Piccinino, and the tireless work of the Cocchi team alongside other historic Italian drinks producers including Campari, Fabbri, Luxardo, Nardini, Pallini, Strega, Cedrata Tassoni, Alpestre and Vecchia Romagna.

Since 2014, Cocchi and Fulvio Piccinino have travelled the world to spread the Futurist word via dedicated and fully-booked seminars (from the Tales of the Cocktail in New Orleans to the Athens Bar Show, from the Bar Convent in Berlin to the Salone del Gusto in Turin).

In October 2014, CocchiBooks released “La Miscelazione Futurista – The autarchic Italian response to cocktails from the 1930s” which has since been reprinted and expanded in 2016.  The book retraces the history of Futurist Mixology alongside classic polibibite recipes. In a short period of time it became a bible for Neo-Futurist Mixologists, and has been listed as one of the world 10 best books about mixed drinks in New Orleans’ Tales Of The Cocktails 2017.

THE COMPETITION – Launched in 2016, The Futurist Mixology competition – which truly celebrates Italy’s creativity and food and drinks – has made Turin the undisputed capital of Futurist Mixology (the Futurists used to call Turin “Futuropolis”, for its futuristic industrial architecture and its cuisine).

GIULIO COCCHI – Established in Asti in 1891, Giulio Cocchi is one of the leading wineries in Italy for the production of vermouths, aperitifs and sparkling wines. It was Giulio Cocchi himself who formulated the original recipes for Barolo Chinato, the Aperitivo Americano and some different types of vermouth that have been in production for over a century.

The Bava family, renowned wine producers in the Asti and Langhe areas, have been managing Giulio Cocchi since the late 1970s and have renewed production by laying the foundations for the cult status that the brand has now conquered. Giulio Cocchi maintains its own character and its own dimension using only traditional techniques and natural ingredients in the production of its famous aperitifs and sparkling wines.