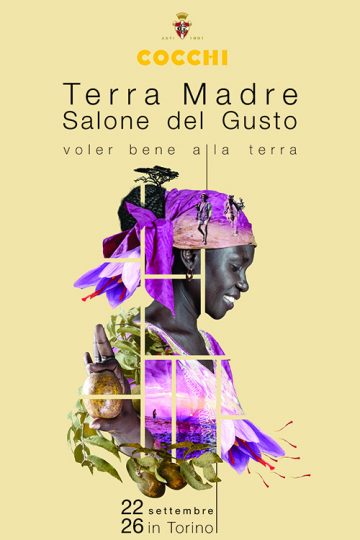 Giulio Cocchi, with its vermouths, the Americano and the Barolo Chinato, will take part to Terra Madre Salone del Gusto, the most relevant international exhibition dedicated to food culture – held in Turin between 22nd and 26th September 2016.

D 132 is position dedicated to Cocchi at Parco del Valentino Lungo Po (open from 10am to 7pm).
Cocchi with its aromatized wines will be protagonist of various events during Salone del Gusto.
Saturday September 24th, 3pm at Circolo dei Lettori – Hall “Prodotti della terra”
“Cacao perdido” for Laboratori del Gusto.
The South American continent is the birth-place of cocoa, plant originating in the high basin of Rio delle Amazzoni, later displaced, thanks to its ancient growers, to Central America and the Caribbean’s and further on to the rest of the world. In the high Amazon Forest cocoa biodiversity is still secured as generator of many precious and almost unknown varieties in countries such as Peru, Ecuador, Columbia and Venezuela. The workshop goal is to rediscover these forgotten qualities, tasting single-origin chocolates deriving from these countries as well as meeting the cocoa producers of Terra Madre food community.

Sunday September 25th 5pm at Palazzo Madama workshop “Medicinal herbs in the Castle court”.
Medicines and syrups, alcoholic drinks or juices but even potions and elixirs! The medicinal herbs are fundamental ingredients in many recipes and it’s their combination to make any recipe unique and original. Inside the Hortus of the Castle garden at Palazzo Madama, more than 100 medicinal herbs are grown, known in the medieval period and whose properties have been handed down through centuries up to us. September is one of the best harvesting months for leaves, flowers and roots among which Absinthe and other types of Artemisia, rhubarb, horseradish and other “radices” (so called by Piero de’ Crescenzi, agronomist of Bologna of the late 300’s). During the visit, the public will be guided on a discovery journey of these herbs and each visitor will be involved in the harvesting operations and the realization of an ancient and secret recipe.

At the Enoteca in Salone del Gusto (Corte d’Onore of Palazzo Reale) Alta Langa Pas Dosè 2008, Bianc ‘d Bianc 2010, Totocorde 2011 and Rösa 2012 can be tasted. The same wines will be also presented at the Alta Langa tasting desk in Parco del Valentino, Lungo Po – nearby the area of Mercato Italiano e Internazionale and the Slow Food presidia (Position nr. E188, open from 10am to 7pm).