Since the beginning of XXth century, Giulio Cocchi had the great idea of establishing authorized retailers where people could taste his original recipes: Barolo Chinato, Americano aperitif, many kinds of Vermouths and sparkling wines.

In 1913 there were seven Cocchi tasting Bars in Piemonte, that soon became twelve.
Most of these bars have now disappeared or they’ve have changed their name, but others are still active and after so many decades still bear the original signs: “Bar Barolino Cocchi”, “ Bar Barolo Chinato Cocchi” or simply “Bar Cocchi”. 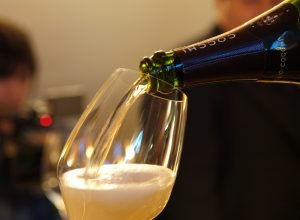 Located in Piazza Alfieri, the heart of Asti , Bar Cocchi is one of the focal points of the city life, a meeting point and discussion hub where, besides enjoying an aperitif or a good vermouth in the evening, it is not uncommon to attend presentations, cultural events and press conferences.