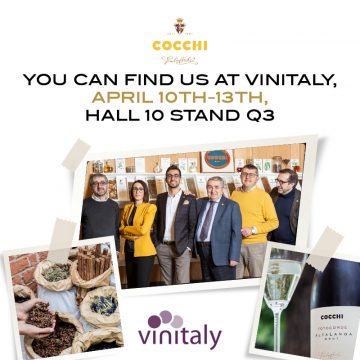 Last year, the company founded in Asti in 1891 celebrated its 130 years of uninterrupted activity with the creation of a new Vermouth di Torino Extra Dry “Ricetta Piemontese”, which will be in tasting at Vinitaly: a vermouth with a classic style, formulated and produced in the Italian cradle of aromatized wines, Piedmont.

Cocchi Vermouth di Torino Extra Dry is based on a “Ricetta Piemontese” (“Piedmontese Recipe”, as highlighted on the label): a strong and precise characterization for this aromatized wine, since the main ingredients are all Piedmontese, or have a solid link with the region.

The wine used is a Cortese, the same used for Gavi Docg; Artemisia Absinthium is 100% from Piemonte mountains. The aromatic profile is characterized by Menta di Pancalieri – a local variety of peppermint – and lemon traditionally used in the garnish of vermouth in our region.

Using a delicious base wine made of local Cortese grapes and botanicals such as wormwood, angelica, coriander and cardamom as well as lemon peel and Piedmontese mint give a fragrant and perfectly balanced flavour.

The Cocchi Extra Dry proudly carries the “Vermouth di Torino” appellation. which includes it in the renewed denomination of Vermouth di Torino, protected since 2017 by a specific production disciplinary.

Vermouth di Torino is a collective heritage of the Piedmontese, which historically had the first promotion center in the royal court of the Savoy and which, in particular from the end of the 18th century, generated a flourishing industry that made Piedmont the Kingdom of Vermouth .

Do not forget the other famous flavored wines of the company: the Aperitivo Americano, the Cocchi Rosa and the iconic Barolo Chinato.

A way of thinking about flavored wines outside the box, as it always has been for Cocchi, not only in the context of mixology but with proposals for food combinations and unusual collaborations that will animate the stand during the days of the fair.

Cocchi’s commitment is also great in the world of sparkling wines, in particular with the appellation of the metodo classico piemontese Alta Langa Docg. At Vinitaly, the new millesimi of Pas Dosé (2015), Bianc ‘d Bianc (2016), Totocorde (2016) and Rosa (2017) will be presented.