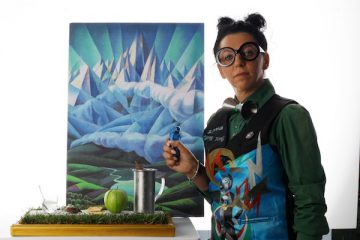 Turin, July 4th: Cinzia Ferro – barwoman at Extremadura Café in Verbania – with its polibibita Svetta is awarded the title of National Record futurist mixologist for 2016 in the final of the competition organized by Giulio Cocchi along with Alpestre, Campari, Fabbri, Luxardo, Nardini, Pallini, Strega and Tassoni.

Cinzia Ferro has even been honored with the special mention Alpestre as well as Giulia D’Alberto, of Close bar of Palermo, who participated in the contest with her polibibita Primo Soccorso (First Aid); special Fabbri mention to Valerio Trentani of the Mandarin Oriental, Milan, who contributed with his polibibita Mi è caduto il bicchiere (I dropped the glass); special Strega mention to Elisa Favaron of the Palazzo delle Misture in Bassano del Grappa who created the polibibita Svegliappetito (wake up your appetite) and special Giulio Cocchi mention to Carlotta Linzalata (Smile Tree of Turin for the polibibita L’iperveloce – The hyper-fast) and Valerio Dussich (Bancoventisei of Latina for his polibibita V.a.f.f.a. ).

In one of the most futuristic locations of Turin, the 35th Floor Lounge Bar at Intesa San Paolo skyscraper shortly launched by Mirko Turconi – the chief barman. The competitors arrived from all over Italy to contend for the title: each with her/his polibibita, fruit of accurate researches and careful studies on the futurist style.

New polibibite are now available thanks also to the other finalists: Roberto Abbadati of M.A.S. with his polibibita Densobolla; Nicola Mancinone of the Hemingway Cocktail Restaurant of Alba with La Eco-Logica (the Eco-Logic); Enzo Tana of Business Caffè of Casoria with his Teatro della Sorpresa (Surprise Theater); Mirco Camilletti of Gran Bar in Fano with the polibibita Gusto Doppio (Double Taste).

THE JUDGES – All the competitors have prepared their mixtures under the watchful eyes of an exceptional jury: Fulvio Piccinino, barman and researcher, author of the book “Futurist Mixology”, Erik Lorincz, head bartender at the American Bar of Savoy in London, Christian Maspes, head bartender of the Gong-Bar at Shangri-La Hotel, Flavia Fresia, journalist of Bargiornale, Alessandro Procoli of the Jerry Thomas Speakeasy of Rome and Roberto Bava, GM of Cocchi and with the presence of notary Paolo Bonomo.

THE PRIZE– Cinzia Ferro was awarded the Farfa metal crown and the tickets to fly at the next Tales of the Cocktail in New Orleans – the most important international show for the mixologist world.

In the glass:     gentian root

THE FEAST –  Futurist also the feast that followed the announcement of the winner, including clangs and verses of poetry (“Futurist Sound Assaults “, poems in concert represented by Rocco Antonio Buccarello with music by Andrea Satomi Bertorelli), exhibition of the original works of Arturo Bonetti and Fillia, Eat-In-Feet and guests arrived from all over Europe.

THE BOOK – For the occasion Roberto Bava – editor of CocchiBooks – presented the reprint of the book  “Futurist Mixology. Polibibite, the autarkic Italian answer to cocktails of the 1930’s” The volume in 2015 was placed among the 10 best bartending books at theTales of the Cocktail in New Orleans, raising the pride of the national production and making school accompanying more than 40 seminars both in Italy and abroad showing a totally Italian mixology style followed by Fulvio Piccinino.

This second edition includes the original recipe of a 19th polibibita considered lost, the Sanatrice, recently rediscovered at Mart of Trento, then studied and newly suggested by Piccinino. Also the iconography is enriched, thanks to Mart contribution, and private collections, art galleries, antiques libraries and historic company archives which for the first time conceded their precious documents and images.

GIULIO COCCHI – Produces since 1891 wine based aperitifs and 100% Piedmonts bubbles.

From its founder Giulio Cocchi the winery has inherited an inexhaustible liveliness and a qualitative research that leads her to be known and appreciated in the five continents. All Cocchi products are wine based and the recipes are those of the past, codified according to the  intuitions of Giulio Cocchi himself. What defines Cocchi style is then simplicity and authenticity: the quality of the wine and the ingredients, the century-old technical expertise and a passion and creativity that have never failed over the years.

Giulio Cocchi with her 125 years of uninterrupted activity is inscribed on the National Register of the Historic Italian companies.