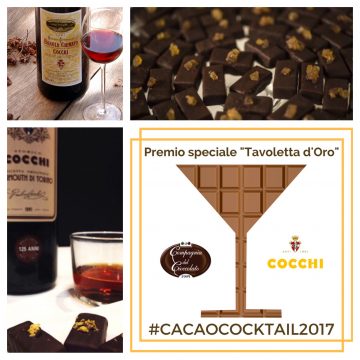 At Salon du Chocolat held in Milan (at MiCo – Portello) from February 9 to 12, Compagnia del Cioccolato in collaboration with Giulio Cocchi will award for the first time the Special Prize “Tavoletta d’Oro” to the best cocktail made with chocolate or cocoa.

It’s a prestigious acknowledgement – a new category included as part of a twenty-year award, which enters mixology with full rights in the world of signature chocolate and the cocoa of origin.

The alliance with Cocchi, for years engaged in the rediscovery of Vermouth di Torino and Barolo Chinato, gives an important contribution to the liaison of the two worlds of cocoa and aromatized wines.

Compagnia del Cioccolato has always been strongly interested in exploring the combinations between chocolate and the different wines, spirits and drinks (in recent years tea and beer, too) and this is a fundamental aspect in its educational activities.

THE COCKTAILS – Bartenders from all over Italy are now sending their original recipes: within February 3rd 2017 the recipes containing chocolate or cocoa and at least one of Cocchi products must be sent by e-mail to the address barcocchi@cocchi.com complete with a picture. The three cocktails which will be chosen by the experts of the Compagnia del Cioccolato will be served at the Sensory Bar of Salon du Chocolat.
The selected cocktails will be presented to the qualified and passionate public of Salon during a seminar on Friday 10th of February at 6pm.

SENSORY BAR – The space at Sensory Bar within Salon du Chocolat will be the place where tasting the best combinations among the different types of cocoa of origin and chocolate with the Vermouths and Barolo Chinato and various spirits, other than the cocoa and chocolate cocktails Cocchi chosen by the Jury for 2017 edition.